Meditating can benefit both caregivers and their senior clients.
Care Needs Assessment

How meditation can help caregivers and their clients 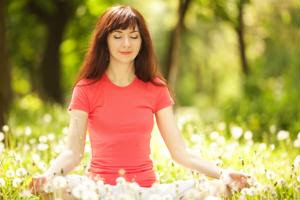 Though many people don't believe meditation is right for them, it can actually benefit both seniors and their companion care providers. Whether you choose to practice yoga, mindfulness meditation or even just deep focused breathing, the various types of meditation have several health benefits for everyone, including seniors and those with Alzheimer's or dementia:

Health benefits of meditation
Seniors who practice a form of meditation regularly have reported feeling less stressed, less lonely and an overall better sense of wellbeing. Meditation can actually make some amazing physical changes in an elderly person's body and brain, according to the Huffington Post:

Meditation for caregivers
Caregivers who provide home care for seniors can potentially benefit just as much from meditation. A study published in Geriatric Psychology found that dementia caregivers noticed improvements in their cognition, and they were also found to have fewer symptoms of depression. The results indicated that meditation is a great way for caregivers to relieve stress, fight depression and feel better overall in their sometimes-stressful line of work.

0 comment(s)
Subsribe To Our RSS